A Brief History of Moving Buildings in Corona

In the true sense of “green” building, Corona has a long and flattering history of relocating residences and other structures so that they can be reused and appreciated by later citizens of Corona. Relocating and restoring an older home in lieu of demolition and building new is one of the most “green” and sustainable things a person can do. These homes are often built with precious materials like old growth lumber that are no longer available, have interiors finishing with magnificent hardwoods and may possess many labor saving devices we now find as “quaint”.

As cities look to shore up declining central neighborhoods and individuals look for homes in a slowly recovering real estate market, buying, relocating and fixing up older and historic homes can make policy, economic and even environmental sense. The photo below shows how home relocations were done in the early days as the Roberds house, built in 1891, was moved from Bluff Street in Auburndale to the northeast corner of Sixth Street and Victoria Avenue. In the background, Corona’s first Railroad depot, built in 1887,

We know that the building now located at 507 Vicentia (Settlement House) was relocated three times:  It was built on the original South 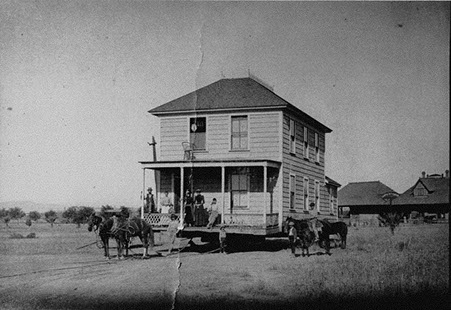 Riverside Grammar School Campus at Tenth and Victoria, then moved to Corona’s first High School in the 1200 block of Main Street,

then to the first Washington School, on northwest Grand Boulevard, where it served as a Kindergarten classroom, and ultimately adjacent to Corona’s Second High School (507 Vicentia Avenue) where it was used as the band room, later as the Police Department storage room for evidence and currently as the Settlement House.

We know that the earliest structure used by the First Congregational

Church was relocated to a spot on the north side of East Sixth Street outside “The Circle.” Another structure, used for Corona’s first schoolhouse, located at 8th and Howard streets, was moved to the town of Prado for several years then relocated to West Sixth Street near Lincoln Avenue, where it served as a storage area for a pottery shop.

(809 East Grand Blvd.) near Fullerton Avenue. A house similar to the Roberds house mentioned above was relocated from Quarry Street, north of Corona City Park to itscurrent location on the east side of Garretson just south of Grand Boulevard. (1113 Garretson Avenue). The Call ranch house was relocated from the west side of California Avenue north of Ontario Avenue to the rear of Corona Heritage Park (510 West Foothill Parkway).

The home of early Corona volunteer firefighter Joseph Brumbaugh was relocated from the south side of Seventh Street (322 West Seventh Street) near Sheridan and repurposed as a guest house (1058 E. Grand Blvd.) at the rear of another historic property located at 1052 East Grand. The large historic Victorian ranch house in the middle of the groves, at 2342 Gilbert, was cut into four pieces, transported, relocated and reassembled south of Lake Mathews. Most recently, two homes on Sheridan Street (807 and 819) have been relocated to the inside of the circle on East Grand alongside the alley between Eighth and Ninth Streets to make room for and expanded parking facility for Corona Regional Medical Center (CRMC).

Nothing is greener and more sustainable than rehabilitating older properties. The least environmentally sound thing you can do is build something new, because of embodied energy. “Embodied energy” is all the energy of the laborers, wood carvers, wood workers, stonemasons, and tradesmen of all kinds (plumbers, electricians, roofers, plasterers, carpenters, etc.) - all of the human energy that went into building the home. To this is added the energy expended to make the building products, such as coal burned to heat the kilns that made the bricks or powered the steam engines that made the woodwork. All that energy has already been spent. The energy required to rehab and restore a house is going to be far less than the amount of energy necessary to build a new house.

The idea of keeping things in a home is what keeps the price of rehabilitating a home down. The big lie is that somehow historic preservation is more expensive. It is simply not true. The whole concept behind historic preservation is to do no harm. It is to go in and maintain as much of the old material as you can while updating things and facilities for the way we live today.